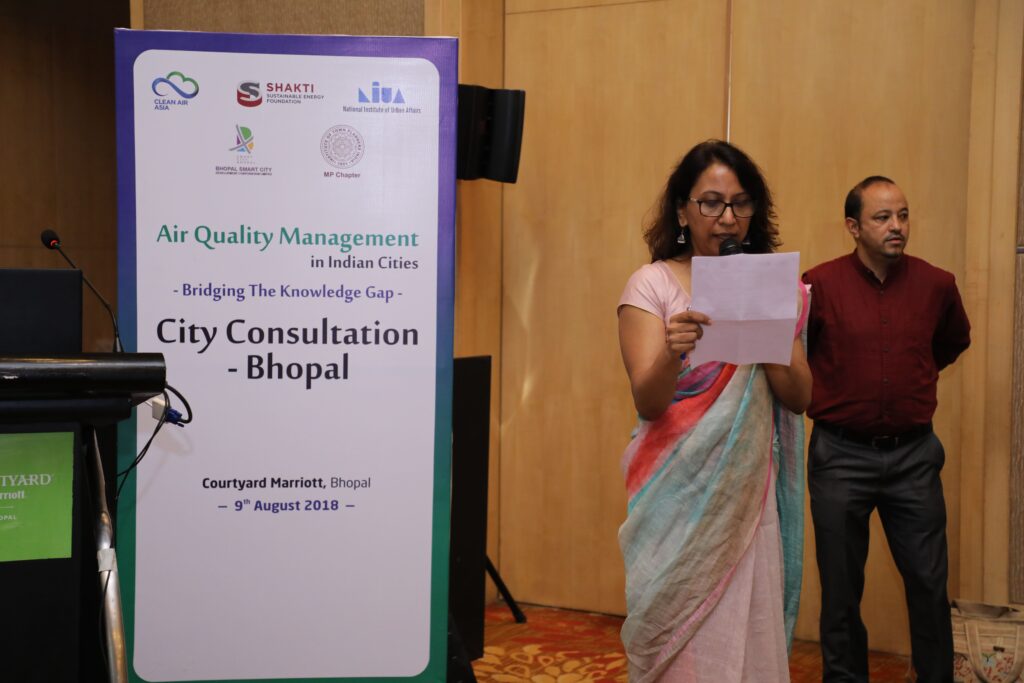 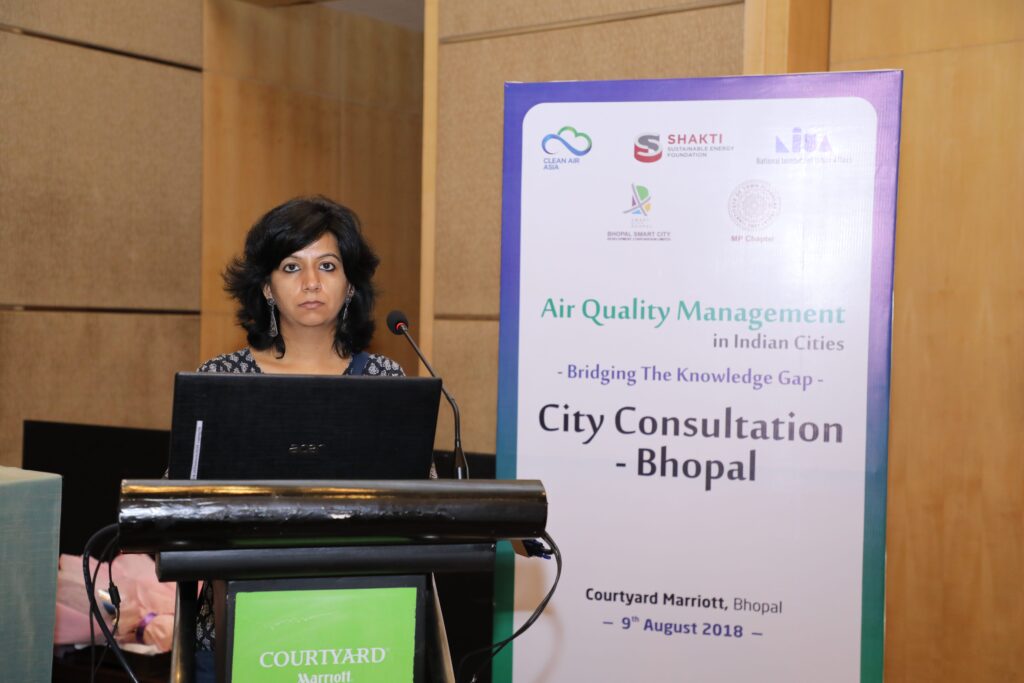 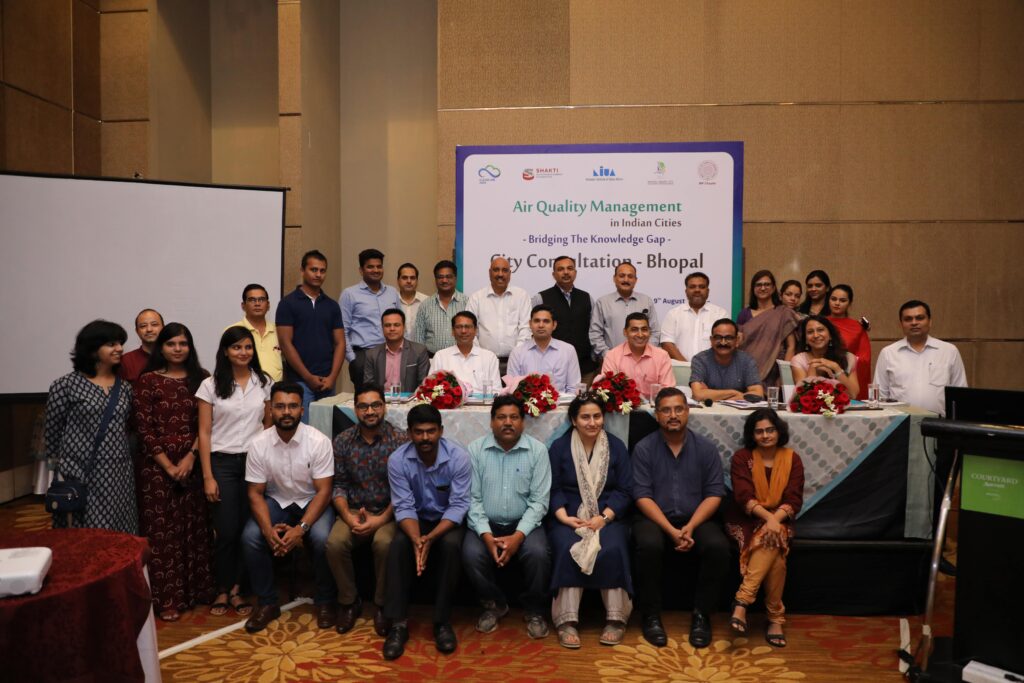 The Shakti Sustainable Energy Foundation helped in supporting yet another successful consultation at the Bhopal smart city on 9th August 2018 in partnership with National Institute of Urban Affairs (NIUA), Smart City Bhopal Limited, and Institute of Town Planners India (ITPI). The workshop was attended by various officials and authorities of the city, such as The Municipal Commissioner, Commissioner of Urban Development and Housing Department, CEO of Bhopal Smart City Limited and Chairman ITPI and Regional Director State Pollution Control Board. There was an inspiring exchange of dialogues on air pollution, health effects and communicating impacts, air quality management and clean air city certification by experts from NIUA, Clean Air Asia and Smart Cities Bhopal. The event also hosted academics from Center for Research on Environment and Sustainable Technologies (CREST) Bhopal and members of SARTHAK NGO.

Is a Framework prepared through a series of consultations by the United Nations Environment Programme (UNEP) and Clean Air Asia was developed to provide guidance in implementing the long-term vision for urban air quality in Asia.

Air Action Plan are set of measures and initiatives that the State Governments and Departments along with the inclusion of NGOs and CSOs undertake to provide a clean and healthy environment to the citizens as envisaged in the Constitution of India.

B. Monitoring Network of the city

It is the Principal Act enacted in pursuance of the Stockholm Declaration, 1972 for prevention, control, and abatement of Air Pollution. They were amended in 1987 giving the Pollution Control Boards more authority and power.

Most states formulated Air (Prevention and Control of Pollution) Rules which deal with meetings of the Board and its committees, power and duties of the Member-Secretary and appointment of employees, power and functions of the Board, the State Air Laboratory, the procedure to deal with appeals and the budget.

Ambient air quality refers to the condition or quality of air surrounding us in the outdoors. National Ambient Air Quality Standards are the standards for ambient air quality set by Central Pollution Control board (CPCB) that is applicable nationwide. The CPCB has been conferred this power by the Air (Prevention and Control of Pollution) Act, 1981.

This paper analyses the PM2.5 mass and chemical constituents over Van Vihar National Park (VVNP), a forested location within Bhopal. A combination of source profiles, temporal evolution and potential source locations were used to identify these factors.

The outcomes of this analyses is expected to strengthen the air quality management plans for both VVNP and the city. Further, it is hoped that the results of this study will provide inputs to validate emissions inventories as well as climate model outputs over the region.

The paper highlights the source profiles, optical attenuation, and potential health risk from exposure to these sources. Road dust was enriched (compared to upper continental crustal abundance) in anthropogenic pollutants including Sb, Cu, Zn, Co, and Pb. Organic and elemental carbon (OC/EC) in PM10 and PM2.5 size fractions were 50–75% higher in paved road dust compared to their counterparts in unpaved road dust.  The estimates of potential lifetime incremental cancer risk induced by the inhalation of Cr in paved and unpaved road dust (PM10 and PM2.5) for both adults and children were higher than the baseline values of acceptable risk. These results suggest that road dust Cr induced carcinogenic risk should be further investigated.

In the 2017, there were 5 manual air monitoring stations in Bhopal and no continuous air monitoring stations. The study suggested that there is a need of atleast 18 Continous Air Monitoring Systems. The study also showed that the major contributor to city’s PM2.5 concentration is from the outside urban airshed which is almost 41.8%, followed by vehicular emission at 14.1%. The study also has certain finding and recommendations which could help in combat the air pollution

The study shows that the Traffic related air pollution (TRAP) is a major source of ambient air pollution in urban areas. Shopkeepers of heavily trafficked roadside shops are persistently exposed to high levels of TRAP. The objective of the study was to eliminate the prevalence of respiratory morbidity in shopkeepers of shops in heavily trafficked roadside areas in Bhopal city (India) and to determine any association with long term exposure to TRAP.

The paper studies the trend of Air Quality in Bhopal, Madhya Pradesh. Air Quality Index found poor category (207.82-241.92) at three locations, moderate air category (105.62-193.07) twelve locations and satisfactory category (78-97) at three locations. Overall average ambient Air Quality Index of Bhopal city was observed moderate during this study of year 2016-17. The relative AQI was found in moderate air pollution range. It may cause serious aggravation of heart or lung disease, it is indication of increased risk of cardio respiratory symptoms in general population in Bhopal city of Madhya Pradesh, India.

A. CAST Study – 30 City survey done by Clean Air Asia. CAST is the tool used to perform the survey.