Clean Air Asia developed a comprehensive analysis tool for understanding the air quality management status in cities – the Clean Air Scorecard tool (CAST). CAST is an excel-based tool which incorporates three indices: (i) Air Pollution and Health, (ii) Clean Air Management Capacity, and (iii) Clean Air Policies and Actions, which taken together give the AQM status of a city. 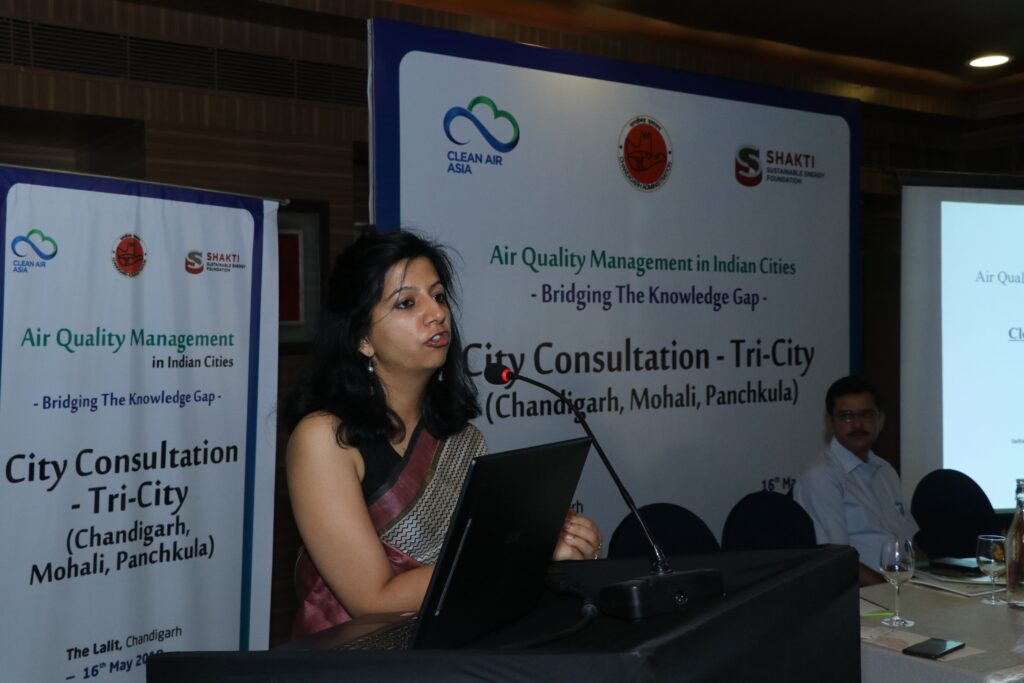 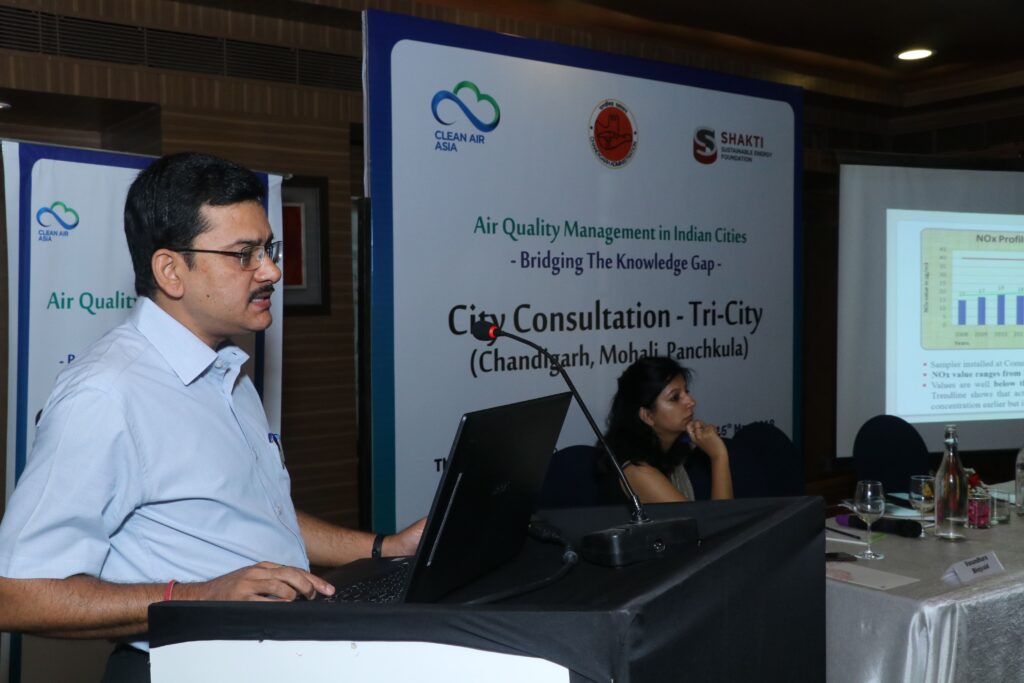 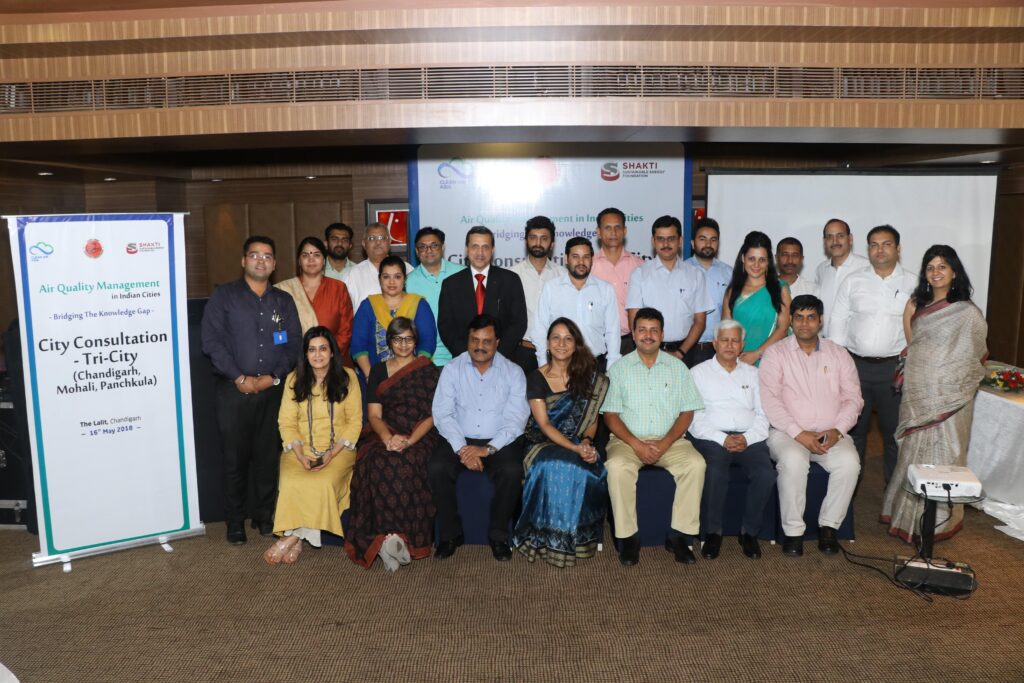 Clean Air Asia India conducted a capacity building and sensitization session in Chandigarh, with critical dialogues on air quality management, health impacts of air pollution, and emerging technologies implemented for monitoring of air. Transboundary issues of pollution between neighbouring cities of Panchkula, Chandigarh and Mohali were also discussed in the one-day consultation workshop which was conducted in collaboration with Department of Environment UT Chandigarh and supported by Shakti Sustainable Energy Foundation. The consultation was attended by officials from Chandigarh Pollution Control Committee, and the Punjab and Haryana Pollution Control Board. Faculty members from Center for Environmental Science and Engineering, IIT Kanpur were also a part of the dialogue along with representatives from Center of Environment Education, and the Chintan Environmental Research Action Group. The objective of the consultation was to bridge the knowledge gap on air quality management by mediating dialogues on strategic interventions for improvement of air quality with different stakeholders in order to make cities more liveable.

Is a Framework prepared through a series of consultations by the United Nations Environment Programme (UNEP) and Clean Air Asia was developed to provide guidance in implementing the long-term vision for urban air quality in Asia.

Air Action Plan are set of measures and initiatives that the State Governments and Departments along with the inclusions of NGOs and CSOs undertake to provide a clean and healthy environment to citizens as envisaged in the Constitution of India.

B. Monitoring Network of the city

They also have special monitoring data which can be accessed at http://env-chd.wernet.demos.rvsolutions.in/beta/aspx/database.aspx

It is the Principal Act enacted in pursuance of the Stockholm Declaration, 1972 for prevention, control, and abatement of Air Pollution. They were amended in 1987 giving the Pollution Control Boards more authority and power.

Most states formulated Air (Prevention and Control of Pollution) Rules which deal with meetings of the Board and its committees, power and duties of the Member-Secretary and appointment of employees, power and functions of the Board, the State Air Laboratory, the procedure to deal with appeals and the budget.

Ambient air quality refers to the condition or quality of air surrounding us in the outdoors. National Ambient Air Quality Standards are the standards for ambient air quality set by Central Pollution Control board (CPCB) that is applicable nationwide. The CPCB has been conferred this power by the Air (Prevention and Control of Pollution) Act, 1981.

In the absence of detailed source apportionment studies for the Chandigarh city, the simultaneous temporal study of air quality and restricted human activities could help to understand the primary sources contributing to the ambient air pollution of the city. In the present study, the impact of lockdown, i.e., March 25, 2020 to May 17, 2020 (in three phases) on the ambient air quality of city Chandigarh, has been investigated. The air pollution trends of 54 days lockdown periods were compared within the phases of lockdown and with the air quality trends of 21 days before the lockdown. Additionally, the peak concentrations during the lockdown were examined, including the possible sources using the Principal Component Analysis, pooled trajectory analysis, and characteristic ratios of pollutants. The study provides an opportunity to understand and identify air pollution sources during restricted anthropogenic activities and plan air pollution reduction strategies.

The long-term trend of air pollutants was studied in Chandigarh, located in Indo-Gangetic Plains of India. The SPM, PM10, NOx, and SO2 depict site-specific variation having different anthropogenic activities. The results indicate that PM10 levels in Chandigarh remain higher than the prescribed annual ambient air quality standards (60 μg m−3) of India. Seasonal Kendall test indicates a declining trend of PM10 for the year 2003 to 2018 at an industrial and commercial site (1996–2016). There is a significant increase in NOx levels at all locations except at commercial sites. As the relative contribution of various pollution sources is still unknown, the seasonal pattern of pollutants will help in knowing the background concentration of pollutants and could help to formulate evidence-based policies to mitigate air pollution under National Clean Air Programme (NCAP).

The increase in number of vehicles in metropolitan cities has resulted in increase of greenhouse gas (GHG) emissions in urban environment. In this study, emission load of GHGs (CO, N2O, CO2) from Chandigarh road transport sector has been estimated using Vehicular Air Pollution Inventory (VAPI) model, which uses emission factors prevalent in Indian cities. Contribution of 2-wheelers (2-w), 3-wheelers (3-w), cars, buses, and heavy commercial vehicles (HCVs) to CO, N2O, CO2, and total GHG emissions was calculated. Potential for GHG mitigation through clean development mechanism (CDM) in transport sector of Chandigarh under two scenarios, i.e., business as usual (BAU) and best estimate scenario (BES) using VAPI model, has been explored. A major contribution of GHG load (~ 50%) in Chandigarh was from four-wheelers until 2011; however, it shows a declining trend after 2011 until 2020. The estimated GHG emission from motor vehicles in Chandigarh has increased more than two times from 1065 Gg in 2005 to 2486 Gg by 2011 and is expected to increase to 4014 Gg by 2020 under BAU scenario. Under BES scenario, 30% of private transport has been transformed to public transport; GHG load was possibly reduced by 520 Gg. An increase of 173 Gg in GHGs load is projected from additional scenario (ADS) in Chandigarh city if all the diesel buses are transformed to CNG buses by 2020. Current study also offers potential for other cities to plan better GHG reduction strategies in transport sector to reduce their climate change impacts.

Vehicular air pollution has been recognized as a major anthropogenic activity responsible for deteriorating air quality in urban areas. One of the major traffic related air pollutants which have serious health effects is carbon monoxide (CO). Chandigarh which was originally planned for a population of five lakhs has witnessed a two fold increase in its population in the recent past. The vehicular population on the city roads is estimated to be around 2 vehicles per person. In the present study an attempt was made to estimate the traffic related CO pollution levels and resulting occupational exposures in Chandigarh, India. The study indicated that the CO levels were positively correlated to the traffic volume and were exceeding the standards in heavy traffic zones. Replacement of old vehicles, improvements in infrastructure, traffic management and establishment of effective and efficient public transport system are among the actions that will need to curtail the increasing trend in air pollution in the city. The map of spatial variation in CO concentration prepared could be used for traffic planning and air pollution control in the city.

The onslaught of human civilization on the environment is increasing, resulting in the imbalance between nature and mankind. Most of the cities are facing serious air pollution problems due to the concentration of motor vehicles and human population within the confined urban areas. Inadequate and inefficient public transport and population growth has led to increase in number of private vehicles in urban Rapid increase of urban population coupled with numerous socio-economic activities is a constant source of increasing pressure on the limited available natural resources leading to constant threat of sustainable development in the urban area. The urban centers have become energy intensive pockets of deteriorating environmental quality. In this Paper an effort has been made to measure suspended particulate matter emissions at peak traffic periods in one of the most popular silence areas of Chandigarh an internationally acclaimed elite city and remedial measures of control have been suggested.

Polluted air has adverse effects on entire nature and living beings. To communicate with the common man about ambient air quality, “Air Quality Index” may be defined as a single number for reporting the air quality with respect to its effects on the human health. Air quality indices (AQIs) for the years 2009 and 2010 are computed for one of the main cities of India viz. Chandigarh using US Environmental Protection Agency (USEPA) and Factor Analysis approaches. Four air pollutants viz. RSPM, SPM, NOx, and SO2 are considered for computation of AQIs in five different zones of Chandigarh as per the guidelines of Chandigarh pollution control committee (CPCC). The responsible pollutant in all the zones and overall responsible pollutant have been identified. Various data exploratory techniques applied to AQIs revealed that they follow positively skewed distributions. Further, Kolmogorav–Smirnove test and Q-Q plots suggest that log normal distribution fits well to AQIs of NOX and log-log normal distribution is reasonably adequate for AQIs of pollutants SPM and RSPM. With the help of these fitted models, some probabilities for the responsible pollutants to fall into good and harmful categories are calculated, thereby indicating the possible health hazards for the population.

The elemental composition and morphology of aerosols, collected from March 95 to February 96 and March 96 to August 96 respectively in the city of Chandigarh, India is determined using Energy Dispersive X-ray fluorescence and scanning electron microscopic techniques. The elemental concentration levels are found to be higher by a factor of 2–7 in the spring season as compared to the rainy season. The concentration of spherical and non-spherical (i.e. elongated) aerosols is more in the spring season and is reduced drastically in the rainy season due to the prominent wash out effect of rains. More accurate particle classification and source identification is obtained when based on combination of chemical composition and particle morphology. Possible sources identified from this analysis are soil dust, Industrial activity, Agricultural and Garbage burning, Maritime aerosols and Automobile exhaust.

The aerosol samples collected from industrial, commercial and relatively cleaner zones from the city of Chandigarh, India, have been characterized using EDXRF and PIXE techniques. Sample collection was done over different time periods during 1994–1996 using the Millipore sampling kit. Sixteen elements, namely, S, Cl, K, Ca, Ti, V, Cr, Mn, Fe, Ni, Cu, Zn, Br, Rb, Sr, and Pb, were quantified in these samples. The loading distribution of aerosol on the filter media was assessed by scanning the sample along its diameter using proton beam. The elemental concentrations in all the samples analyzed by both the techniques have been corrected for this distribution. The elemental concentrations measured at different sites were used in absolute principle component analysis in order to identify the major sources affecting these sites and to apportion the measured air pollutants to these sources. Plausible sources identified from this analysis are soil dust, industrial activity, vehicular traffic and refuse burning. The soil dust accounts for the major fraction of the measured mass.

A. Communication Portal for local government

CAST study done by Clean Air Asia, India has placed Chandigarh as an developing city. The City has taken various initiatives to curb air pollution and also taken initiatives in terms of policies and actions.